Humanity has changed. We are no longer bound to the flesh of one body, to the faculty of one mind, to the gravity of one planet. Death, like most diseases, has been cured. Travel, even between planets, occurs in a matter of hours, rather than years and years. We have become much greater than we once were.

Future.Shock is a far-future transhumanist Forged in the Dark game. It is set in the Grand Design, the new name that humanity has given to the solar system, now that we have settled on much of it. From the solar farms on Mercury to the deep space observatories on the moons of Neptune, new humanity has made a name for itself.

Mechanically, the game has a Forged in the Dark / Powered by the Apocalypse heritage, though steps have been taken to ensure that the game adheres to transhumanist principles in its storytelling.

The game is centered around a community in the Grand Design, focused on your own artistry and philosophy. Influence and fame are your goals; you seek to be seen, to be heard, to make a difference. You stake out your own path to eternity among the stars.

Book 1, Become as Gods (setting and philosophy) A look into the Grand Design, offering a brief overview of its history and its underlying philosophies. We look at how humanity has settled the solar system and given peace a chance.

Book 2, Betafork Blues (core mechanics, quickstart).
You're an upstart band looking to make it big. You've managed to book a gig in the prestigious Club Aphrodite, a social hotspot in Venus' digital orbit, when disaster strikes - the Club has forked you over! Taking back the show, and setting off your trajectory as the Grand Design's newest stars, is the core storyline that drives Betafork Blues, the Future.Shock quickstart. It will contain the core mechanics of the game, presented for ease of use,  as well as a number of example characters.

You've scratched the surface of the Grand Design in Become as Gods, and witnessed the beginning of a journey to stardom in Betafork Blues. Now, it's time to tell your own story. Instantiation, the third book of Future.Shock, includes an expanded character creation process, rules for long-term advancement beyond the individual level, for building a Community of your own, for seizing influence in the world around you, and many, many more.

In order to download this roleplaying game you must purchase it at or above the minimum price of $10 USD. You will get access to the following files:

Support this roleplaying game at or above a special price point to receive something exclusive.

If your money is better spent elsewhere, feel free to claim a community copy, free of charge. Community copies are valid for all current and future books of the game.

New community copies will be added as purchases are made. 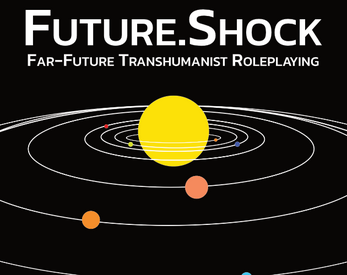